Reference material for Iwami-Ginzan Mine

This is just a translation of the booklet by Y.A..
All the credit and
authorship belong to the original
booklet as shown below. 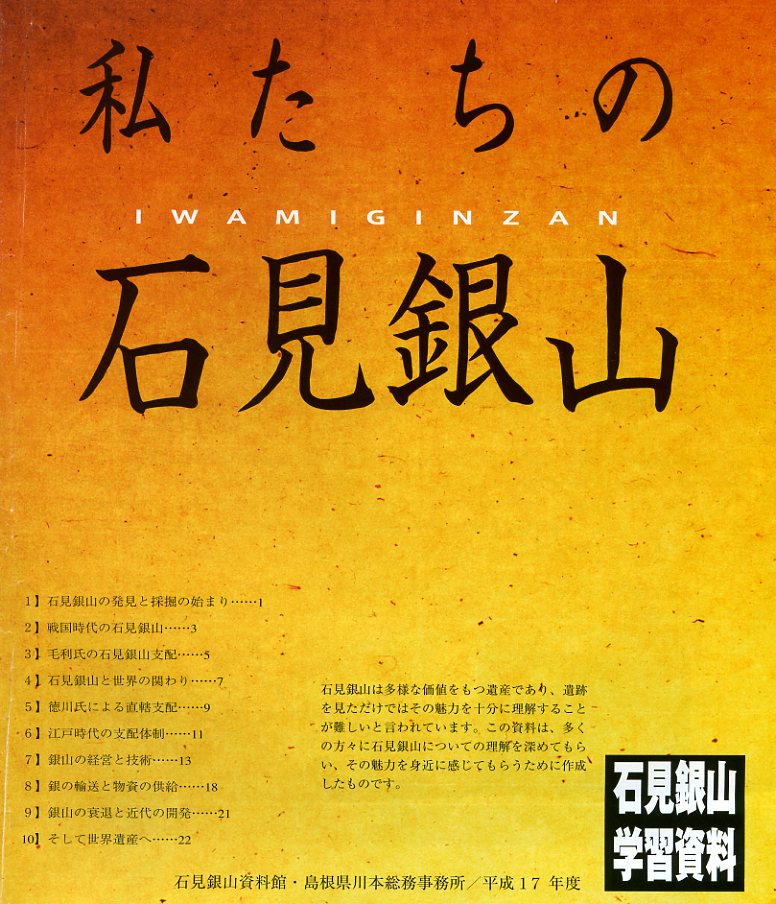 The Iwami Silver Mine, Discovery and Establishment of Mining

In 1526, towards the end of the Muromachi era, the Iwami Silver Mine was discovered by a wealthy merchant named Kamiya Jyutei of Hakata while he was sailing on a ship toward Sagi Copper Mine in Izumo.

In the early stages of mining operations, silver ore was shipped to the Korean Peninsula for smelting.  Jyutei, however, introduced the Haifuki-method, or cupellation-method, from the Peninsula to Iwami Silver Mine; this in turn increased silver production and was quickly adopted by other silver mines, such as the one in Ikuno.  Jyutei's introduction stimulated innovation in Japanüfs mining technology, enabled mass exportation of silver to Korea and China, and helped establish silver as the basis for Japanüfs commercial activity.

(1) Discovery of Iwami Silver Mine by Kamiya Jyutei

According to üean old record of the silver mineüf[1], Kamiya Jyutei, sailing eastward from Hakata Harbor[2] on the Sea of Japan, saw a glittering mountain far to the south.  He heard from a waterman that the name of the mountain was Ginbu-sen[3] or Sen-no-yama[4] and had once produced a large quantity of silver.  Jyutei consulted with Mishima Seiemon, the manager of Shigi Copper Mine[5], about what he had heard.  It is said that together with Mishima, Jyutei hired three technicians who began digging for silver ore at the valleys of Sen-no-yama on March 23, in 1526[6].

Lord Ohuchi, the provincial lord of the Iwami area at the time, had been
receiving large profits through monopolistic trade with China (the so-called Kango-Boeki),
which required special licenses of the trading parties tying up merchants in Hakata.
Jyutei was also engaged in the Kango-Boeki and promoted development of the Iwami
Silver Mine using the knowledge and techniques he had acquired from his experience
as a globally active merchant and from his relationship with Lord Ohuchi.
The ore mined at Sen-no-yama was shipped from Tomogaura, Nada[7], and Koryou[8].

The Kamiya family was a dominant merchant family in Hakata as was the Shimai family.  According to the Kamiya family lineage, the founding father was Nagatomi, the second was Kazue, and the third was Jyutei.  Kazue served as the chief waterman in the ship dispatched to Ming[1] in 1538[2] by Lord Ohuchi.  This indicates that the Kamiya family were merchants who carried on trade with China and who were connected with Lord Ohuchi.  During this time, Japanüfs chief export to China consisted mainly of copper.  Jyutei is said to have found the Iwami Silver Mine while on a ship during one of his business-trips as a purchaser to the Shigi Copper Mine.

Tomogaura, located in the Maji district of Nima Town, was used as a port to ship silver from the Iwami Silver Mine to Hakata during the mineüfs early history.  A second port, Okidomari of Yunotsu Town, later replaced Tomogaura as the mineüfs primary port.  There are many reasons for this, but during the reign of Feudal Lord Mohri, both the mine and Okidomari were under the control of Mohri whereas previously Tomogaura and the mine had been controlled by separate entities.  Additionally, Okidomari had superior water access even though it was positioned further from the mine than Tomogaura.

(2) Propagation of the Haifuki Cupellation Method

During the early stages to the Iwami Silver Mine, ore was shipped to the Korean Peninsula via Hakata for smelting.  The shipping of raw ore was, however, costly and because only high quality ore was acceptable, not all of the ore that was shipped was suitable for smelting.  This resulted in a considerable waste of resources.

Jyutei, therefore, invited two technicians, Soutan and Keijyu, from Hakata who introduced a refining process called Haifuki, or cupellation, in 1533[3].  This is a process whereby the quantity of precious metals contained in raw ore is determined.  First, the silver is separated from the rock ore using lead; second, the resulting lead ball is placed in a cupell, a porous crucible; third, the cupell is heated, which oxidizes the lead, and reveals the silver.

The Haifuki method has been used in Europe to produce gold and silver since before BC and has similarly been described in Chinese documents dating as far back as the Tang[4] Era.  While this technique had been known in Japan since ancient times, it was first utilized by the Iwami Silver Mine in the 16th century.  The dominant view is that cupellation was introduced to Japan by way of


the Korean Peninsula.  In the Annals of Joseon Dynasty[1] it is written that a man named Ryu SyoSo
was punished for disclosing a technique for extracting silver from lead to the Japanese[2].  This recordüfs account matches closely with the introduction of haifuki and is thus believed to confirm the methodüfs propagation route through the Korean Peninsula to Japan.

The haifuki, cupellation, methodüfs introduction brought about a rapid increase in silver production at Iwami Silver Mine, which led to technological innovation throughout Japanüfs mining industry: from Ikuno Silver Mine in Tajima[3] to Tsurushi Silver/Gold Mine in Sado.[4] Advances in silver production due to the haifuki method are credited with facilitating not only economic reform throughout East Asia but also economic and cultural exchanges with the West.

(3) Japanese Silver in China and Korea

Records of Japanese silver in Asia began appearing in Chinese and Korean documents as soon as five years after the haifuki methodüfs introduction to Japan[5].  Foreign demand for Japanese silver was driven chiefly by economic conditions in China and Korea.  By the end of the fifteenth century, China (Ming Dynasty[6]) had transitioned to a ügsilver economy[7],üh which, when coupled with the countryüfs growing economy, further drove regional demand for silver.  Similarly, Korea, whose aristocrats of the time were consumers of high class Chinese goods, increasingly required silver for its trade with China.  The Iwami Silver Mine rose to fill this demand, and large quantities of Japanese exported silver quickly flowed into China and Korea.

In order to contend effectively with its nationüfs growing demand for silver, the Ming Dynasty took several measures: it built the Taiso Silver Warehouse of Peking in 1442, centralized the management of silver as a medium for exchange, and encouraged the development of silver mines in the country.  Though the Ming Dynasty promoted its own silver mines, the southern part of China was not yet fully developed and the majority of these mines were managed locally.  This inhibited the dynastyüfs ability to secure domestically produced silver and pressured them to seek out Japanese exports.

Iwami Silver Mine during the Warring Age

As silverüfs dominance as a means of exchange grew, so too did battles over the ownership of the Iwami Silver Mine.  Warring lords used silver towards war expenditures and also to reward their warriors.  Skirmishes were fought at mountain castles like Yamabuki-Jyou and on mountains strategically important like Sen-no-yama where silver ore was mined.  While the ownership of the

[1] The annual records of the Joseon Dynasty were written from 1392-1863 (ĺęĹNëĄĺęÄ└ś^)
[2] Japanese were called Wa-jin at the time
[3] Located in Hyogo Prefecture, discovered in 1542
[4] Located in Niigata Prefecture
[5] Historical and anecdotal evidence further supports Japanese exported silver in the region.  According to the Annals of Joseon Dynasty, in 1542 a priest by the name of Ansin was dispatched to Korea by the Japanese sovereign with as much as 80,000 ryou (about 3.2 tons) worth of silver in order to demand trade.  There is also an account of Chinese merchants bound for Japanese silver who drifted ashore in Korea only to begin piracy.
[6] 1368-1644
[7] Silver, while not as valuable as gold, was adopted because it was more easily produced and accepted as a means of trade

mine changed many times during this short period, the silver-producing areas were never involved in battles; thus, silver production continued unabated.

(1) Skirmishes for the silver mine

The 16th century, the period during which the Iwami Silver Mine was being developed, was a period characterized by the Japanese word, gekokujou, which means üeinferiors overthrowing their superiors.üf  It implies that irrespective of social status, the strongest will dominate.  The warlords battled fiercely for control of the silver mine, which represented a treasure trove, in terms of war-funds, and thus a means to expand their feud (fiefdom).

Iwami Silver Mine was controlled first by Ohuchi Yoshioki of Suoh Province[1], but in March of 1531[2], Ogasawara Nagataka, castellan of Nukuyu Castle in Kawamoto area of Ohchi County, conquered it by attacking Yataki Castle, just south of the mine. 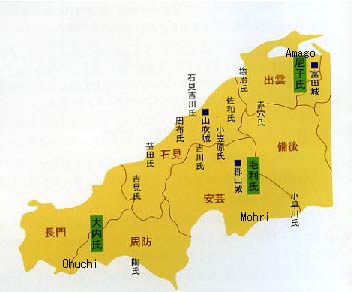 Ohuchi, who had established himself in Suoh Province[5], became governor of Iwami Province during the age of Kousei.  Ohuchi later turned his governorship over to Yamana, but in November 1477, Ohuchi Masahiro was authorized by Shogun ASHIKAGA YOSHITAKA as the governor of four provinces: Suoh, Nagato, Buzen, and Chikuzen.  This gave him control of lands in Tojoh, Saijouh of Aki Province, and Nima of Iwami Province.  This type of administration is called, directly translated to English,

It is believed that Ohuchi held his government office for controlling Nima Province near the current Health Park in Amagouchi of Nima Town in Ohda City.  Shiraishi Site was discovered during Health Parküfs construction and has been identified as a large scale site of a manor dating back to medieval times.  It has been identified as the possible base of Ohuchiüfs government.

(2) Skirmishes between Mohri and Amago

In 1551, Ohuchi Yoshitaka was defeated by his retainer, Sue Harukata, who seized the real power by backing Yoshinaga as heir to the Ohuchi Family. 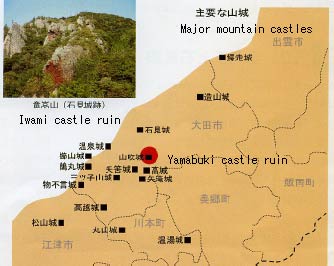 Thus Sue clan gained the control of the silver mine, but it again moved into the hand of Mohri Motonari [1]
who, defeating Sue clan at Itsukushima Island in 1555 [2], dispatched his people to Iwami to control the
silver mine..
Right after that, Amago clan in Izumo started to fiercely attack Mohri who owned the silver mine.
Amago invaded the castles in August as well as in March in 1556, but being counterattacked by Mohri
they retreated from castles like Yahazu, Mitsuko, and Mikusu.
In September of the same year, however, Amago attacked the Yamabuki Castle again and finally
defeated the lord of Yamabuki Castle, Satsuga Naganobu, who fled through Kohro Zaka Slope and
committed harakiri (suicide) at Kaizohji Temple in Yunotsu. Amago appointed Honjho Tsunemitsu, the
lord of Susa-Takayagura Castle, to the lord of Yamabuki Castle, and ordered him to take control of the
silver mine.
In 1558 [3], Mohri's warriors advanced to Beppu of Misato Town in Ohchi County in order to regain
the silver mine. But Amago Haruhisa's warriors, marching from around Ohda, cut their advancement,
and Mohri's warriors suffered a crushing defeat at Oshinbara in Kawai Town of Ohda City ("Oshinbara
Fall"). In 1559, Kikkawa Tsuneyasu attacked Ogasawara Clan belonging to Amago's ally, winning them
over to his side. They together attacked Yamabuki Castle in 1561, but Honjoh Clan fought against them,
preventing their invasion. Mohri, in turn, coaxing Honjoh with a promise to give him some territory to
become his ally, succeeded in completely regaining the silver mine from Amago in 1562.
Yu Clan, being based in Kushiyama Castle in Yunotsu, had been allied with Amago in the skirmishes
for the silver mine. They fled to Hirose Town of Yasugi City where Amago's base castle (Toda Castle)
was situated, as soon as Mohri took conctrol of the silver mine. In 1565 Yu, wanting to regain Yamabuki
Castle and Iwami Castle near the silver mine, donated stone lanterns to the Great Shrine of Izumo and
prayed for it. But his dream was never fulfilled.

Mountain castles around the silver mine.

Many mountain-castle runins exist around the silver mine which were stages for skirmishes for the silver
mine. The castles were used for strongholds in battles. The lord of a castle had his residence near the
castle and in battles entrenched himself in the castle fighting against the invaders.