This is a manuscript for the speech by Yuzo Asano given at France-Japan
Particle Physics, Toshiko Yuasa Laboratory,
at EPOCHAL, on May 21,'09.

Ladies and gentlemen, dear organizers, distinguished guests from
universities and abroad, on behalf of relatives, I would like to express my
heart-felt appreciation and thanks, for providing us with such an occasion
to have a memory ceremony for the late Dr. Toshiko Yuasa.

Toshiko Yuasa is my aunt, one of my motherÅfs younger sisters.
Mr. Ichii, present here, is also in the same position. He would be more suitable
to present my auntÅfs daily life, since he took a good care of her, especially
after she got ill. However, as my vocational position is closer to hers, I dared
to make presentation of my memory of her.

This is only my personal memory. So please forgive me if there are

some misunderstandings in small details.

As I was brought up in a remote area, Shimane Prefecture, I had only
limited occasions to meet her directly in my boyhood. I was born in Himeji City
near Osaka, but it was toward the end of World War II and air raids by American
B29 bombers were becoming more and more fierce, since there were munitions
factories there. The family, except my father, who had to stay there owing to
his work at an academic institution, had to flee from there to my fatherÅfs parental
home at Hamada City in Shimane Prefecture. The City was so remote that in
those days, it would have taken more than 24 hours by train to go there from
Tokyo. I vaguely remember my mother saying that my aunt had once visited
Hamada City shortly after the end of World War II, but I donÅft remember seeing
her there. My aunt, however, continued sending me novel post stamps, since I
was known to her as collecting stamps.

It was when I entered the University of Tokyo and decided to major in
physics that she was so glad and sent me several old books in physics. Included
were, Shin-ichiro TomonagaÅfs ÅgQuantum MechanicsÅh, Gentaro ArakiÅfs ÅgTheory
of MoleculesÅh, all of which were very old and could have been given to her by
the authors. Dr. Gentaro Araki was a classmate of my fatherÅfs at Tokyo
University of Literature and Science (now University of Tsukuba ) and could
have been a close friend of my auntÅfs.

The first occasion that my aunt met my wife and me personally was
in New York when I was studying at Columbia University for Ph. D. At that
time she was very healthy and energetic.  We went to a Japanese sake bar
and drank a lot of Sake.  From her career, it is easily understandable that
she was very sympathetic to those who were in trouble and had to work very
hard. She was impressed with an audio amplifier which I had built by myself
in my apartment in New York. She said that Dr. Kohri, a Japanese physicist
working in Paris in those days, had made one for her in Paris.

In those days, I had to work very hard at Brookhaven, because Nevis
Laboratory could not succeed in remodeling its synchro-cyclotron on which my
thesis depended. I had to work nights in a Columbia-Yale experiment, and days
for my thesis. One day I met Dr. G.E. Brown at Brookhaven and talked him my
situation. He spoke that to my aunt at a conference. My aunt worried and wrote
me a long letter advising me to take a good health care.

The next time we met was in Japan. She had been diagnosed with
cancer. She didnÅft drink much this time. At that time, the Director in General
of KEK was Dr. Suwa, the first director of the Laboratory. My aunt admired
him for his strong will not to drink until the 12 GeV proton synchrotron had
its beam successfully.  She said, life without alcohol would make a big difference
in terms of available time in oneÅfs lifetime. Probably she was saying this to
herself to keep away from alcohol. She was critically ill. And yet there were
a mountain of things for her to do. She must have been thinking how precious
a second was. Therefore, it was out of the question for her to lose time by drinking.

My thesis advisor at Columbia University was Madame C. S. Wu. Some
people called her a dragon lady or slave driver. Really she was such a person.
However I could understand her very well. I never heard complaint from my
aunt about being a woman scientist. I have to admit France was much better
in working environment for a minority.

In early America, it was not so. Dr. Wu did a very good work finding
parity non-conservation for the first time in beta decay. Some people thought
that the work deserved a Nobel Prize, and also that one of the reasons that
she didnÅft get it was due to the fact that she was a double minority. That is,
she was not a genuine American, and she was a woman.

Evenings, when other students were absent, Dr. Wu would come into
my office and talk about the life in America.  She always stressed that one
had to do a better job than an American in order to survive in US. If one did
the same job as an American, she used to say, one would not be valued. She
would say, ÅgYou always have to do a better job than the Americans. Otherwise
people will not recognize you.Åh Then she used to talk about pains she had to
take when she was young in San Francisco. She was almost killed with the poison
of beryllium when her boss ordered to process it.

What was embarrassing for me was, when she got exited, she started
to talk in Chinese. After talking for a few minutes, she suddenly realized that
I could not understand Chinese. This determination of hers to surpass Americans
made her a super-worker. She also required others to work as hard, acquiring
the nickname dragon lady or slave driver. Though my aunt did not complain, I
can easily imagine that there must have been big hardships for her to continue
researches as a minority.

As Dr. Wu had rivalry with the Americans, so did my aunt with English
physicists. I do not know whether she had a special rival in UK, or she said
that in general, but she always said we had to be careful when we argue with
an English physicist, since they do a through job.

My specialty in physics is a little different from my auntÅfs, and I donÅft
know much about her works. There are quite a many documents introducing her
life and works; among others the one by Dr. Miwae Yamazaki is superb in that
it introduces my auntÅfs personal experiences and feelings in beautiful sentences.
By reading it, I was quite impressed. I also heard that there are not a few young
women physicists who became physicists inspired by reading the book.

My aunt put the greatest stress on the fundamentals. Someone told
me an interesting episode of hers. When my aunt was taking a driverÅfs license,
she is said to have practiced the sewing machine, in order to train the coordination
between legs and hands, which is required to drive a manual-shift car.

According to the book by Dr. Yamazaki, the Curie family also regarded
the fundamentals and sincerity as the most important. Therefore, my auntÅfs
aesthetic sense resonated with that of her master, Joliot-Curie, and that was
the principal driving force for her to continue researches, I think.

I heard my aunt, after suffering from cancer, did everything to fight
against illness. I heard that she even drank blood of the animal. My mother
tried to persuade her to stay in Japan with her in Shimane. Actually my aunt
went to Hamada City in Shimane Prefecture and stayed there for a few days
with my parents in a resort hotel named Senjoh-en owned by the local
government. The hotel is on a beach demanding Japan Sea. You can enjoy
a really beautiful scenery there. They must have spent a good time remembering
their youthful days a half century ago. 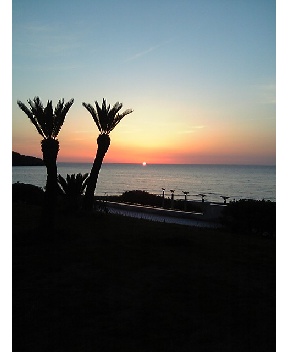 Another view from near Senjoh-en


But my aunt finally declined the offer saying that she had some work
to do. Probably she had in mind her responsibility to carry out the collaboration
between France and Japan. Mr. Ichii, present here, did his best for her. You will
be able to ask him about my auntÅfs situation confronting the death at the
banquet. Many co-worker physicists also tried to help her. Among others,
Dr. Mitsuo Sakai devotedly looked after her in Paris.

My aunt must have been greatly relieved of her vocational responsibility
by these physicists.

In those days when my aunt was critically ill, I was engaged in an
experiment with international collaboration at KEK. Since I was the only
person to take care of the data acquisition program, I couldnÅft leave KEK.
If I had done so, some physicists from abroad would have been at a loss
without being able to take data. My former thesis advisor at the University
of Tokyo, Dr. Haruhiko Morinaga, urgently invited me to come to Paris. But
I could not. It was a shame.

Now the situation for working women is improving, I hope. Actually,
more and more great works have been accomplished by women in Japan as
well as overseas. My aunt must have been very sorry for not being able to
accomplish her task to the end due to illness. But now she is watching the
great activities by women with hope and expectation, I think.

Thank you very much for your attention.